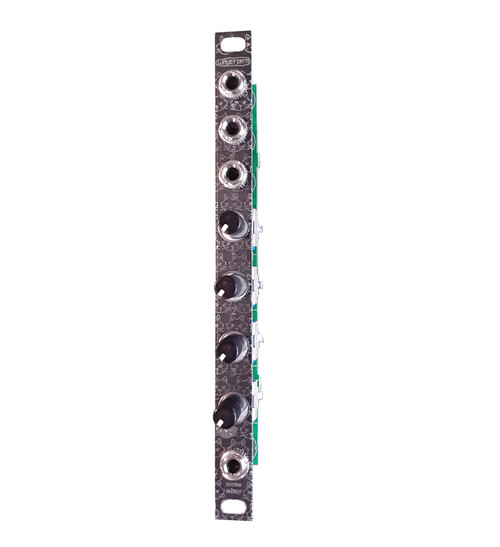 The Waveform Meow Mixer is a 2HP 3-channel powered Eurorack module that has 3 inputs with attenuation, and 1 summed main output with a main output volume control. It can be mounted just like any other Eurorack module, but what separates the Meow Mixer from the rest of the litter is when used in conjunction with the Waveform Mewsic Box 60HP Eurorack case, as the Meow Mixer can be mounted directly on the rear of the case, taking up no space in your case.

The Mewsic Box has space for the addition of a powered speaker (or two) on each side panel, and using the summed mono output of the Meow mixer along with a chiclet 386 powered amplifier board (sold with the external speaker on the Mewsic Box shop page), can turn the Mewsic Box into an all-in-one groove/drone/noise/party/meow machine. The Meow Mixer is a medium difficulty build, as there is a tricky part to it, so view the instructions on how to build this on our Build Guide page to make sure it's within your technical ability before purchase. The faceplate is black with silver, but when mounted in the Mewsic Box the faceplate is not used. The faceplate is reversible with our Louis Vuitton-ish luxury cat motif on one side, and a more traditional, classic plain look on the other, for those of you who hate cats and all things fun.

MY OTHER CAR IS A MODULAR SYNTH Bumper Sticker